Amongst the local history books at the Heritage Service is a small pamphlet entitled “Belgian Refugees Garden Party 1915”.  This is a copy of the official programme produced for a garden party held in the grounds of Edgecombe Hall in Southfields on June 30th 1915, which was opened at 3pm by HRH the Duchess of Vendôme.  On arrival, she was to be greeted by Sir Henry Kimber, Alexander Glegg and the members of the Reception Committee (who aren’t included in the list of Sub-Committees on the front page).  Flowers and a souvenir programme were to be presented by Miss Phyllis Houdret and Master Neville de B Priestley.  Tea was available, as were light refreshments “including Fruit Salads Ices, Strawberries and Cream, Lemonade, Ginger Beer, Coffee, Sandwiches &c”.  Responsible lady helpers were supervising children who were selling souvenirs of all the Allies and sweets. 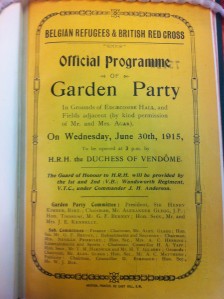 On the map of the site were both an Entertainment platform and an Entertainment Tent.  The platform started with the band of the Holborn Industrial Schools, playing a selection of Belgian pieces and British war songs, followed by a Pastoral Play, a Hat Trimming competition for Gentlemen and a Nail Driving competition for the Ladies, amongst other things, closing with the prize distribution.  Over in the Entertainment Tent, in what may have turned out to be the better location, were a series of musical performances, including pupils from Putney County Secondary School, the Jean (Belgian) Quartet and a concert featuring dance and recitations.  Another platform in the Edgecombe Hall grounds had dance, fencing and a concert and Maypole dance.

Rather unfortunately, no sooner had the Duchess arrived than there was a clap of thunder and torrential rain started – and continued for the rest of the afternoon.  According to the Wandsworth Borough News, this washed out some of the carefully prepared refreshments, but as much of the entertainments carried on as possible.  The girls from Putney County Secondary had to march over in the rain, but reportedly gave a fine performance – luckily in the tent.  Edgecombe Hall’s owners opened the house up as well as the grounds, and the Duchess took shelter there – having to decline a tour of the grounds on account of having a cold and not wishing to make it worse.  Various sports carried on regardless, with particular mention due to Winifred Crewe, who took part in all 4 girls races, coming 2nd in the 100 yards and the skipping race but claiming first prize in both the egg and spoon and potato races.

Programme available in the Heritage Service

The Wandsworth Borough News of 5 February carried several stories relating to the effect of the war on the borough. The Tooting Relief Fund Committee, had an argumentative start to their work at a public meeting over the make up of the committee back in September 1914, and more than once feature in the local press with debates over their ongoing duties. The meeting reported in the Borough News included a local vicar expressing disappointment that the committee’s work appeared to be mainly giving out “doles” [money], as he felt they should be devising schemes to provide work instead. He approved of the workroom for women which had been set up at the Wesleyan Hall in Tooting, and claimed that it was Socialists on the committee who were doing nothing but give out money. That last remark caused protests that “if the Borough Council was composed of socialists then they would move Heaven and earth to provide work”. Another committee member asked if they were to allow people to starve if they could not find work? Official figures apparently showed unemployment in Tooting to be low, and reliable figures were needed to prove that unemployment work schemes were successful. Reverend French agreed that if work could not be found then the only way to help was by making payments, but if that was the case his time was more usefully spent elsewhere and he resigned from the committee, as did Reverend Bevill Allen, Mr Cooper Rawson and Mr W J Mellhuish.

The other slight controversy of the meeting was the receipt of a large quantity of flour from Canada, to be distributed among the poor. Two Tooting bakers had, at the request of Mr Shepherd, offered to make this into bread free of charge, but the committee objected to this offer as both the bakers were German. Councillor A J Hurley acknowledged that it was kind of them to offer to do it, but felt that there were plenty of English bakers who would have been equally kind had they been asked. He also wondered what the Canadians would think if they knew their flour was being baked by Germans? The matter was then dropped, with no record of which bakers eventually made the bread.

The newspaper also reports on the various home defence forces that had been set up around the borough. These were localised versions of what was the Home Guard in World War Two, and reports of their activities included the Athlete’s Volunteer Force: Wandsworth and Southfields division, the Southfields Defence Force and the Home Defence League, South West London division. The report for the Athlete’s Volunteer Force referred to the donation of 6 rifles to the Wandsworth Rifle Club by Sir Henry Kimber and to plans for divisions to be founded in Tooting and Roehampton. The headquarters of the Athlete’s Volunteer Force was Wandsworth Rifle Club, so presumably the two were closely linked. Southfields Defence Force was based at the London, County and Westminster Bank, Southfields Station. The paper carried their orders for February, including parades, exercises and recruitment – they were keen for existing members to encourage others to “be prepared to take their place to defend their hearths and homes against a ruthless enemy” and wanted to keep numbers at around 800 men. The Home Defence League was based at Trinity Road and had the same commanding officer as the Wandsworth Regiment of the Volunteer Training Corps, so presumably it was formalised later. It was divided into several platoons which each had instructions in different areas of the borough for drills, with the whole regiment due to parade for General Sir O’Moore Creagh on the upcoming Saturday.

Wandsworth Borough News available on microfilm in the searchroom